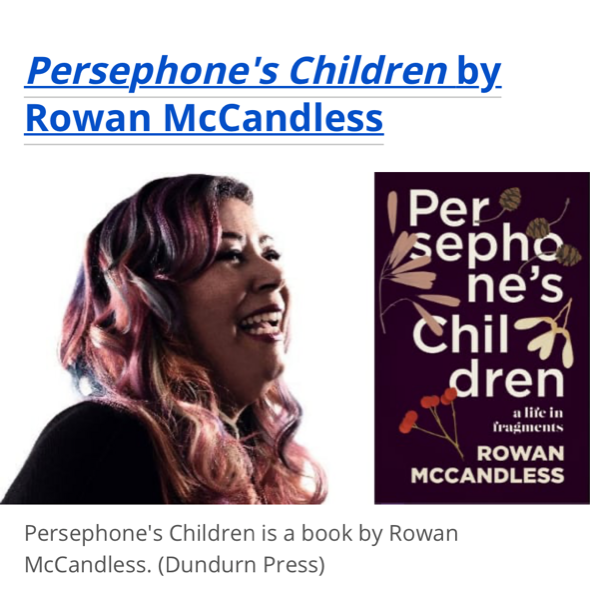 Persephone’s Children is on CBC’s list of new nonfiction 56 works of Canadian nonfiction coming out in fall 2021.

Join us as we celebrate the launch of Rowan McCandless’s Persephone’s Children (Dundurn Press). Presented as part of Thin Air 2021: The WINNIPEG INTERNATIONAL WRITER’S FESTIVAL and featuring a conversation hosted by Whitney French.

The launch will be hosted live in the Atrium of McNally Robinson Booksellers, Grant Park and also available as a simultaneous YOUTUBE stream. The video will be available for viewing thereafter. Before arriving, please review details of how to attend physical events here at the store.

After years of secrecy and silence, Rowan McCandless leaves an abusive relationship and rediscovers her voice and identity through writing.

She was never to lie to him. She was never to leave him; and she was never supposed to tell. Persephone’s Children chronicles Rowan McCandless’s odyssey as a Black, biracial woman escaping the stranglehold of a long-term abusive relationship. Through a series of thematically linked and structurally inventive essays, McCandless explores the fraught and fragmented relationship between memory and trauma. Multiple mythologies emerge to bind legacy and loss, motherhood and daughterhood, racism and intergenerational trauma, mental illness and resiliency. It is only in the aftermath that she can begin to see the patterns in her history, hear the echoes of oppression passed down from unknown, unnamed ancestors, and discover her worth and right to exist in the world.

Rowan McCandless is an award-winning author of fiction and creative non-fiction, and serves as the creative non-fiction editor for The Fiddlehead. She has been long-listed for the Journey Prize, won the Constance Rooke Creative Non-Fiction Prize, and received gold for One of a Kind Storytelling at the National Magazine Awards. Rowan lives in Winnipeg.